WEDNESDAY 13, SUMO CYCO, and THE CROWNED 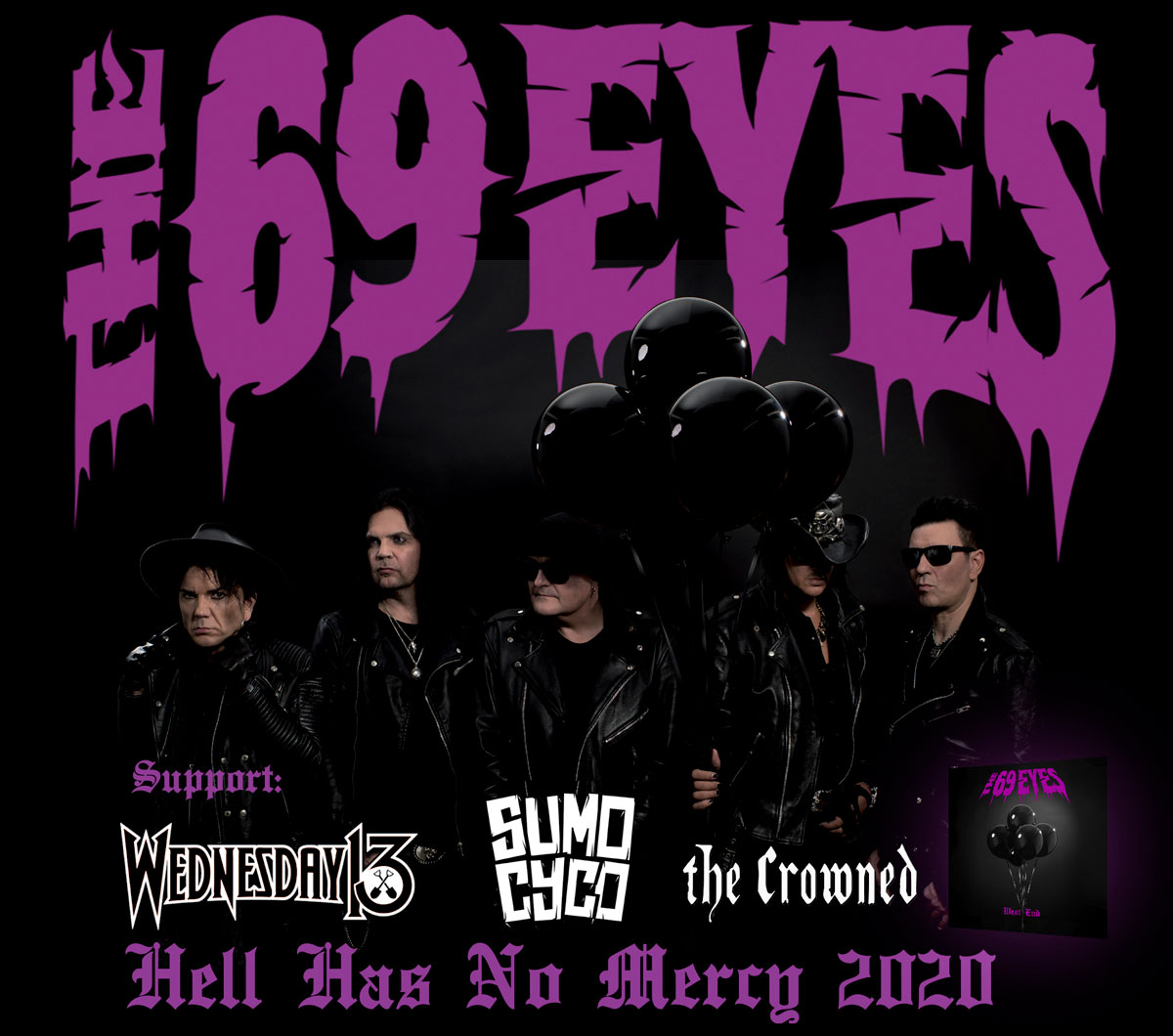 Conceived in Finland in 1989, dark rockers THE 69 EYES have come a long way and shaped the genre of ‘Goth ‘n’ Roll’ like no other. With several platinum-selling albums like Blessed Be and Paris Kills released around the millennium, the quintet not only reached #1 of the single and album charts in their home country of Finland, but also plunged the world into their sinful cosmos of love, death and eternal melancholy and outlived any other band emerging from the goth hype of the early 2000s.

By developing their sound further into sleaze rock on Devils (2004) and Angels (2007) and not shying away from pitch black Elvis allusions in singer Jyrki 69’s majestic dark voice and unique dance moves, the band established their worldwide following by relentlessly touring Europe, America, Asia and Australia. And while the concept of time seems to play no role in the life of vampires, the year 2019 marks a reason to celebrate and blow out more candles on the cake than most other bands will ever be able to see flickering in front of their eyes. It’s time for the 30th anniversary of THE 69 EYES – and of course they prepared something special from the damp cold of their crypts:

Leaving their dreams behind has never been an option for THE 69 EYES and their new anniversary album, West End has a truly apocalyptic taste to it and it seems that vocalist Jyrki, guitarists Bazie and Timo-Timo, bassist Archzie and drummer Jussi 69 are more alive than ever, while dancing in the ruins of our world: “The title West End evokes a dark image – when something dies, something new takes its place and we all have to change in order to stay alive. I feel like this planet is at a turning point. The end of the western world is near and the question is: What will happen when the west ends..? The title has multiple meanings for us… but be assured it has definitely nothing to do with The Pet Shop Boys or London”, he laughs.

Having been together for 30 years now, spending over half of their lives as a well-established team, the band refuses to recycle their sound over and over again and show no signs of slowing down in tempo. Therefore most of the songs on their 12th studio piece West End are up-tempo rock anthems full of heaviness, black memento mori moments and dark humour: “At the moment I would say it’s the best record that THE 69 EYES have ever done and if you’ve been avoiding us till now, it’s about time to check us out and this is a good album to start with. It’s a modern rock’n’roll record, fitting for 2019.”