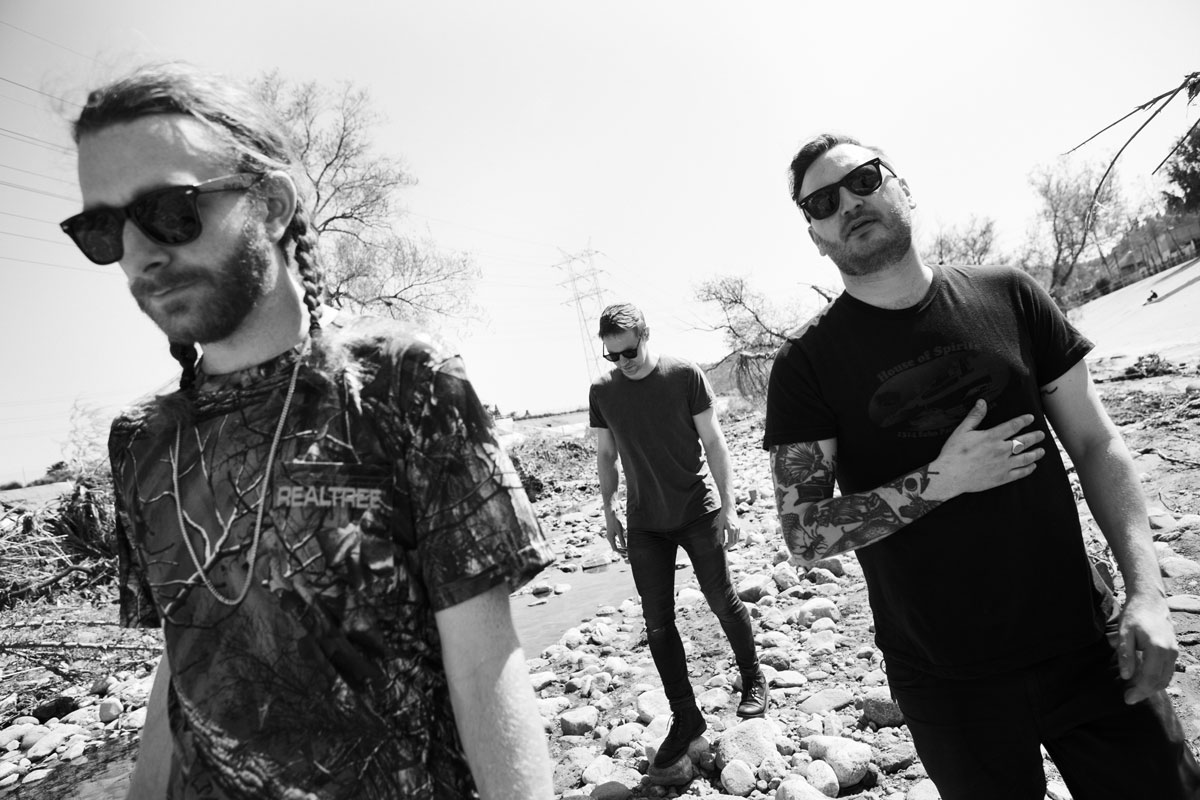 Four albums and 13 years into its career, Bear Hands has mastered the art of the unfamiliar, flouting trends and genres to capture the ephemeral with each new project. Fake Tunes, the band’s fourth full-length album, ventures further into uncharted territory: It’s a document of coming to terms with straddling the desire to stay young and the embrace of a slower life, all while navigating a present that looks nothing as expected.

Fake Tunes is an album of firsts for Bear Hands, comprised of vocalist Dylan, bassist Val Loper, and drummer TJ Orscher. It marks the group’s first album recorded in Los Angeles, as well as its first since the departure of founding member and guitarist Ted Feldman. Produced by Chris Chu of POP ETC, Fake Tunes is both playful and searing, a collection of electro-pop introspection girded by hip-hop textures and psychedelic bones. Together, it’s the sound of a band coming full circle, one that sees Bear Hands both returning to its roots and redefining itself for the future.

“It was daunting to have to go back to writing most everything myself,” says Rau. “At the same time, it’s been cool to have every single song be personal. It’s a dark time in America, and I moved to L.A. specifically to run away from a drug addiction I had in New York. That was going better, but not perfectly, so that’s ended up bleeding into the songs, too. “

Fake Tunes captures that existential turmoil, reckoning with the vertigo of life careening off the beaten path. But, as the tongue-in-cheek title suggests, it’s also a lesson in not taking yourself too seriously. Fake Tunes’ 11 tracks veer from the meaty, rhythmic indie anthems the band cut its teeth on to digitally-infused numbers that swerve across stylistic lanes. The result is a fitting statement of what a band can be—and the expectations it can defy—nearly a decade after breaking out of its scene.

Bear Hands formed when Rau and Feldman began collaborating as students at Wesleyan University. They soon teamed up with Loper and Orscher, both of whom hail from Connecticut’s hardcore punk scene, and the band convened in NYC to test their chemistry on stage.

Bear Hands would go on to release its acclaimed debut LP, Burning Bush Supper Club, in 2010, riding steady hype to 2014 showstopper Distraction. Radio soon caught on, earning the band major chart success with singles “Giants” and “Agora,” alongside a late night TV debut on Conan. The group quickly earned a reputation as a visceral live act, touring with the likes of Passion Pit, Killer Mike, and Cage the Elephant, and landing on festival bills from Coachella to Reading & Leeds. By 2016, the band was venturing into moodier, complex spaces with the release of third album You’ll Pay for This, which landed critical acclaim, a top five charting slot, and extensive touring during which they further honed their expansive live sound.

Then it all ground to a halt. Following the 2016 election, Feldman left the band and Rau moved across the country to L.A. to address ongoing challenges with substance abuse. That period of flux and reflection would prove to be a valuable test for Rau, Loper, and Orscher; the outcome is Fake Tunes, the sound of a band tried, regrounded, and more passionate than ever. “It took us a minute to step back from everything and be able to write music,” Loper recalls. “We regrouped and realized we wanted to be a band.”

Rau says he found himself “basically starting from scratch,” writing much of the album alone at ABC Rehearsal Studio in Eagle Rock. “I had some nuggets that were half-finished instrumentals and it was very blank, so I followed a schedule where I went there three or four times a week at 8 a.m. to get over there before anyone was there.”

With the nucleus of the new songs formed, Rau and the band decamped to a cabin in the Catskills to refine the work and cement the group’s new dynamic as a trio. The process saw Loper and Orscher stepping into more central songwriting roles, and collaborating on tracks in a piecemeal, intuitive process that allowed the album to take shape around the songs, rather than the reverse approach taken on past records. “When we first started the band, it was just the four of us in a room writing songs—no computers and it was very raw,” Orscher adds. “And the songs reflected that. They flowed and were kind of easier. And in a similar way that’s how we did this record.”

“It was way less of a studio experience and more of a small rooms, one-on-one experience,” Rau says of the album sessions and his process developing the tracks with Chu. Rau similarly brought girlfriend Ursula Rose into the fold as a collaborator. At home in Echo Park, he’d play her early versions of the songs, with each going into separate rooms of their house to write lyrics in response and then reshape the songs together. The process would yield “Ignoring The Truth” and “Blame,” as well as two tracks featuring Rose as a featured vocalist: album closer “Confessions” and single “Blue Lips,” a weary tune penned after a night of drinking red wine that Rau describes as “about being fed up and hitting your limit with someone.”

Now standing firmly on the other side, Bear Hands is touring alongside Foals, Walk the Moon, and Twenty One Pilots, taking the band to ever-larger stages throughout the summer. For now, though, they’re content to just take it one day at a time. “It feels like this record is grateful,” Loper says. “We feel lucky to be here, to have the chance to keep making music together. It feels lighter. The songs are shorter, they’re pretty poppy, and they’re to the point. And that’s where our music is most impactful.”

All meaty, beaty, big and bouncy, IRONTOM set themselves apart from the pack by bringing pop clarity to a blend of ‘70s-inspired rock and twisted electronics. They introduced themselves with lead single “Be Bold Like Elijah,” from their 2017 debut album Partners, which was produced by AWOLNATION’s Aaron Bruno, and which influential music outlet Buzzbands praised as “a nod to 1970s shredders and latter-day electro-rockers.”

The Los Angeles-based band celebrated the album’s release with an arena tour with the Red Hot Chili Peppers, followed by 2017 tours with alt rock newcomers Missio and new Canadian rock royalty Arkells. 2018 saw more touring with AWOLNATION and UK break out band Nothing But Thieves for IRONTOM, before the band released their new songs “Kid Midnight” & “Black Cat” this winter.

IRONTOM’s live show centers on the endlessly riveting interplay between vocalist Harry Hayes’s outrageous showmanship and guitarist Zach Irons’ fierce intensity. Both onstage and on record, the band gives off an infectious energy that comes from a brotherhood-like connection. The band has been featured in live series from Audience Network (Directv), Baeble Music and Daytrotter Sessions, and their music has appeared in the Showtime series Shameless.