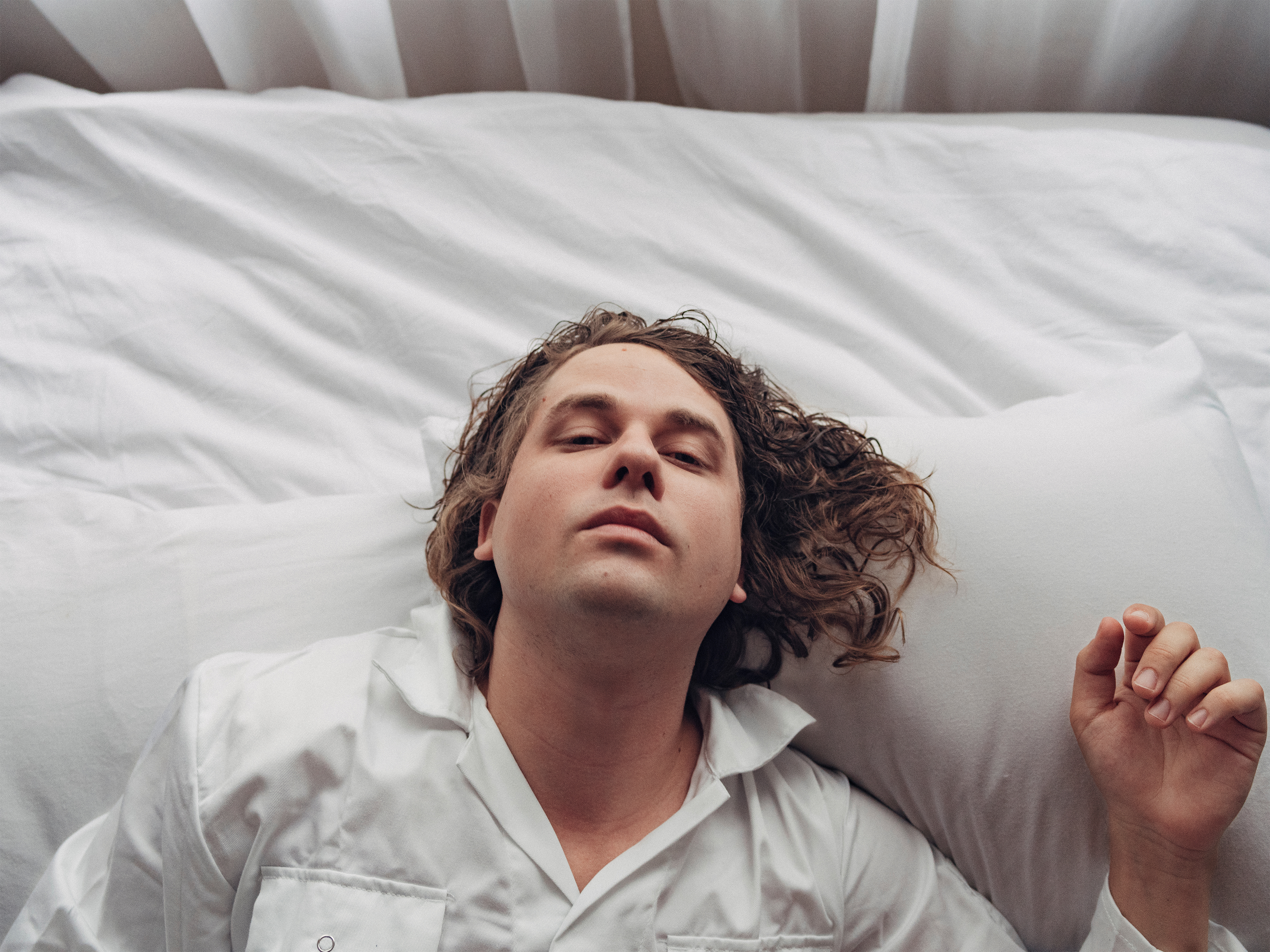 With his four acclaimed solo albums and myriad records of various collaboration, Kevin Morby has become a true musical auteur. His singular vision, literate lyrics, and aptitude for catchy, dense songwriting has placed him firmly among the ranks of modern icons like Bill Callahan, Kurt Vile, Sharon Van Etten, Will Oldham, and Jeff Tweedy. Each Morby record possesses its own unique persona and explores intriguing themes and fertile terrain through shifting, focused textures and dexterous, dedicated skill. And now, with the lavish, resplendent, career-best double LP Oh My God, Morby delivers a grandiose director’s cut of his biggest statement to date, epic in scope as well as sound.

Throughout his past work, Morby has noticed the ubiquity of an apparent religious theme. Though not identifying as “religious” in the slightest, Morby—the globetrotting son of Kansas City who has made music while living on both coasts before recently returning to his Midwestern stomping grounds—recognizes in himself a somewhat spiritual being with a secular attitude towards the soulful. And so, in an effort to tackle that notion head-on and once-and-for-all, he sat down in his form of church—on planes and in beds—and wrote what would become his first true concept-album.

“Religion is around all of us,” Morby says. “It’s a universal language and there is profound beauty in it. I’ve found it a useful tool within songwriting, as it’s something everyone can relate to on some level. There are religious themes or imagery in a lot of what I’ve done, so I wanted to get all of that out and speak only that language for a whole record. It’s not a born-again thing; it’s more that ‘oh my god’ is such a profound statement we all use multiple times a day and means so many different things. It’s not about an actual god but a perceived one, and it’s an outsider’s view of the human experience in terms of religion.”

Morby admits he has viewed the world through a skewed spiritual lens his entire life. As a kid he was told by his working-class parents that he was a Methodist, though the family rarely if ever made good on that claim come Sunday, and he saw fire-and-brimstone billboards on Kansas roadways with the aim of scaring heathens straight. Despite his ignorance and indifference, religion seemed to be everywhere, and as Morby grew as a musician—playing bass for Woods, fronting The Babies, and with his solo career—he embraced its influence with his work.

In 2016, on the heels of a trio of critically-acclaimed albums, he wrote the protest song “Beautiful Strangers” about the devastating world events of that year, and in it he inserted multiple “oh my god”s as pleas of desperation. The song became his most celebrated work to date and the phrase became a mantra for Morby, inspiring him to weave the exclamation conceptually into the fabric of an entire album. In effect, he sought to highlight how that immortal turn of phrase embodies so much of our relationship with the sacred and profane—how religion is all around us, always, and that by simply uttering an OMG we enforce its ubiquity and ability to endure while humanizing its reach.

In January 2017, preceding the release of his fourth solo record City Music, Morby went into producer Sam Cohen’s Brooklyn studio for four days to record a handful of material written with his usual folk-meets-lo-fi-electric-guitar sound in mind. Cohen, with whom Morby made his 2016 breakthrough Singing Saw, had started recording the new songs with a business-as-usual mentality when on the third day he was struck with an idea: Rather than create what was becoming Singing Saw: Part 2, what if they stripped everything back and used only a few colors at a time instead of the entire Morby rock palette, focusing on Morby as hyper-literate singer instead of guitar-slinging troubadour?

“Sam suggested that we make songs that sound like sonic pop-art that only have a few colors, like a Keith Haring piece,” Morby says. “My other records had tons of colors, so we decided to keep this stark, like a painting that’s black-and-white with one vibrant blue. We went back to the drawing board and thought about what we wanted to do conceptually across an entire piece. And for the first time I could do exactly what I wanted, as I had time and the ability to get everything precise. Sam encouraged me to let my lyrics sit on top of everything else, and that discovery and the confidence that came with making my fifth record helped me realize the new direction was exactly where we needed to be. We opened it up completely and set out to make something in its own universe.”

Over the remaining day-and-a-half, Morby and Cohen recorded new versions of four songs—“Oh My God,” “No Halo,” “Savannah,” and “Nothing Sacred/All Things Wild,” the latter becoming a mission statement for the new sound and featuring Morby singing, Cohen playing a subtle organ part, and Morby’s drummer Nick Kinsey on congas. Breaking the songs down into their separate parts served Morby’s religious theme perfectly, as did the blueprint of “Beautiful Strangers,” a song that would serve as a skeleton key of sorts for everything that was to come. Over the course of 2017, he wrote an album’s worth of songs modeled after “Strangers” while on tour.

As Morby jetted around the world playing shows, he came to realize that all that air travel was making its way into his music, too. He had always used his time in the sky to work on songs and listen to demos he had recorded, but he began noticing an aero-dynamic emerging in his lyrics as well. “Flying can be something of a religious experience for many people, myself included,” he says. “It’s unnatural, and it can be so scary being that high up—a few big bumps can even make an atheist pray. You’re anxious as you take off and thinking about death, then you level off and suddenly you’re in this kingdom above the clouds. There’s a holy feeling, and a big part of the record’s theme is being above the weather. The first song, ‘Oh My God,’ starts with chaotic hammering on a piano and then smooths out with a choir singing; it’s meant to mimic how I feel on an airplane.”

All that flying also meant Morby was sleeping in a new place each night, a situation he also learned to embrace creatively—most of Oh My God’s songs were written from beds. Morby typically starts and ends each day by playing guitar or writing songs while under the covers, a practice that mimics prayer in myriad ways. “There’s something sacred about working from bed,” he says. “It’s where you make love and where you dream. I always write just before I go to sleep and right when I wake up. It’s where I can access that feeling of dreams. Any bed is always a sanctuary, but my bed at home is the Holy Grail.”

Morby sought to represent these sentiments visually for the release of Oh My God. In addition to using a portrait of him reclining in his own fluffy-white bed at home in Kansas City on the album cover, he also worked with the filmmaker Chris Good on a short film to accompany the release. The film stars Morby as he wanders through a dream-like series of encounters—on planes, in cars, in a diner, at home in his back yard—and presents a Gondry-esque vision of the album and its holy mood.

Sam Cohen’s second solo LP, The Future’s Still Ringing In My Ears, just might be a magical thing. An album blessed equally with melody, melancholy and depth. A richly psychedelic listening experience, immaculately produced, often the work of one man toiling away alone in his studio but sounding like a cast of many, chasing his dreams late into the night. A collection of songs that take stock of a maddening present and a potentially dark future, but delivered with heart, warmth and wit.