JULIEN-K and PLAGUE OF STARS 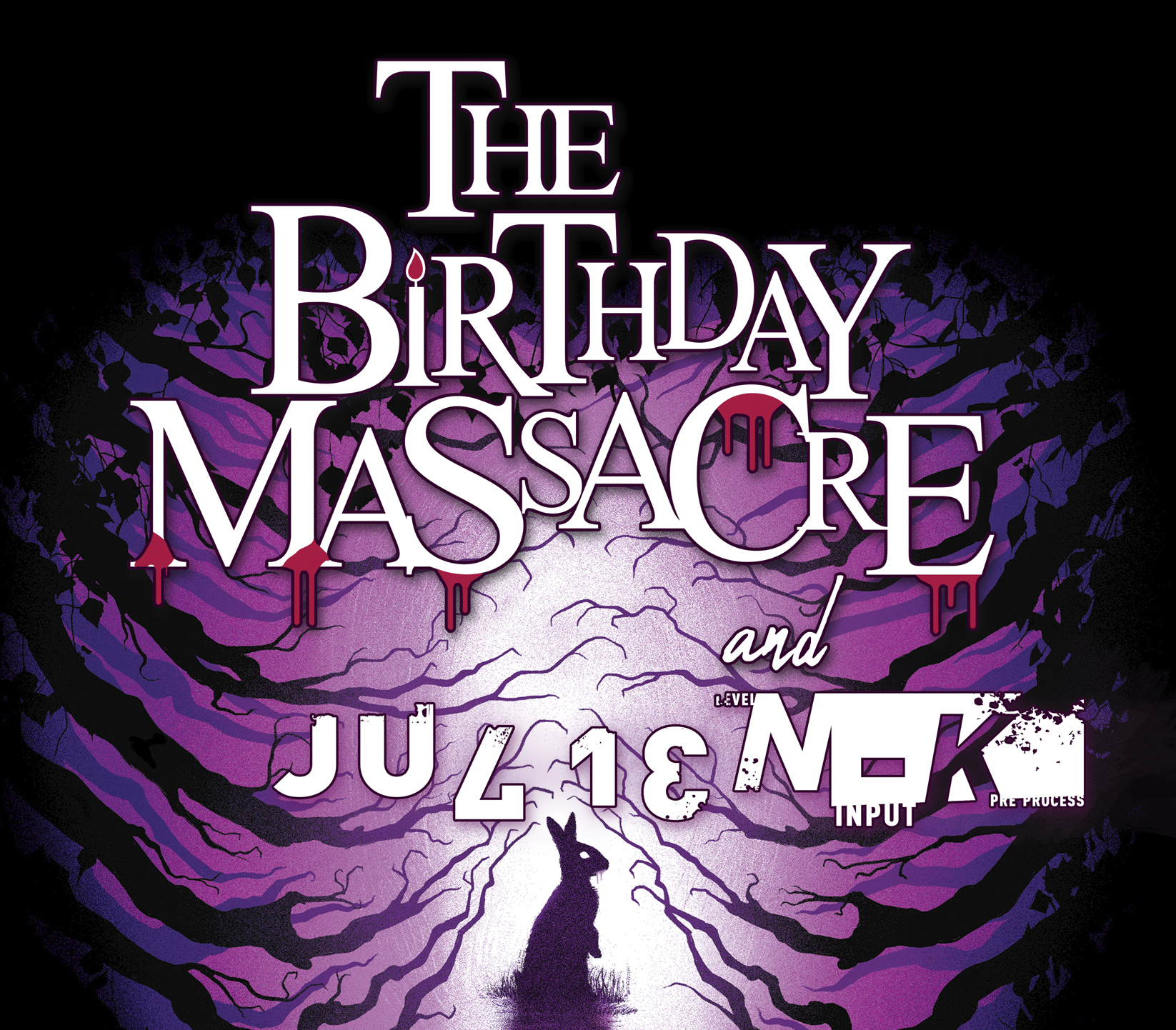 THIS SHOW HAS BEEN POSTPONED

Information regarding a rescheduled date will be announced as soon as possible. Tickets purchased for the originally scheduled performance will remain valid for the new date, so please hang on to your original ticket for entrance.

A captivating hybrid of ’80s electronica and aggressive guitars, curiously fused with a cinematic quality of melodic progressions, The Birthday Massacre’s soundscapes have encapsulated a diverse and devout fan base. Formed in 2000 under the name Imagica, the band played their first show at Diversity Nightclub in London, Ontario, Canada. Their original lineup consisted of Chibi (vocals), Rainbow (rhythm guitar), Michael Falcore (lead guitar), Aslan (bass guitar), and Dank (keyboards). With this lineup, plus the addition of OE on percussion, they released a seven song demo EP in very limited edition.

In 2001, the band relocated from London to Toronto, Ontario and changed their name from Imagica to The Birthday Massacre. In July of 2002, they self-released the limited edition CD Nothing and Nowhere and added a new drummer, Rhim. Two years later, they followed up with the EP, Violet. With a growing fan base on the internet and in their city of Toronto, their confidence was shown onstage with extreme energy and highly entertaining performances.

2005 was a big year for The Birthday Massacre. Not only did they add O-En on keyboards, but were signed in Europe by Repo Records and in North America by Metropolis Records. Both labels re-released Violet as a full length album with four extra tracks. Having time to mature their patent sound, the extended commercial release of Violet drew in many new fans while maintaining the same appeal for listeners who enjoyed the band’s debut album. A video for their song “Blue” was released, which was produced by NYC artist and director Daniel Ouellette. The video fit The Birthday Massacre well; it showed their knack for mixing themes of horror and tragedy with fun and satire to create a unique and versatile experience.

In early 2007 The Birthday Massacre and Metropolis Records decided to re-release the band’s self-released 2002 debut Nothing and Nowhere. Featuring early versions of popular Birthday Massacre tracks, Nothing and Nowhere also includes five songs that had not been available since the band’s release went out of print. The album is an amazing collection for not only the completist, but newcomers alike. With their 2007 album, Walking With Strangers, The Birthday Massacre once again exceeded the expectations of their ever-growing and devoted fan base. Co-produced by Rainbow, Falcore, and the legendary Dave “Rave” Ogilvie (who also mixed the album), TBM remained true to the sound that gained them the praise of fans and music critics alike, while further refining and expanding upon their signature sound. In late spring of 2008, the band released the Looking Glass EP and embarked on a North American tour with Mindless Self Indulgence.

After enjoying years of traditional music business success, they have spent the last decade methodically moving away from the mainstream approach that put them on the map, opting to carefully steer their fans in a new direction, towards their new independent alternative electro rock project Julien-K – which sounds more at home with acts like Depeche Mode, The Kills, Nine Inch Nails, New Order, The Presets, Interpol, and Phantogram.

The ensemble experiments to create a new genre-defying metal act, deliberately combining metal sub-genres, as well as other musical textures, to create something innovative. Their cover of “In the Pines,” a Leadbelly bluegrass original, as well as When Morning Came, a mix of doom, death and symphonic metal, set the tone for this new band.

Their debut album When Morning Came released with Zerobudget Records, received such remarks as “a striking and wonderfully diverse album that has plenty to offer fans of dark, brooding Metal in all its forms” (Metal Temple), “a good choice for those who like to hear a mixture of several different style,” (Sonic Cathedral), and stated that “the band has absorbed nearly every variation from the recent metal and rock history and created something that has not yet existed.” (Rockin’ Papparazzo), receiving 8/10 stars across the board from reviewers.

After a brief hiatus, the band is performing and writing new material for an album release expected in June 2019. The upcoming release is expected to capitalize on defying metal genres, vocal styles, and absorbing additional genres outside of metal into the ultimate sound.