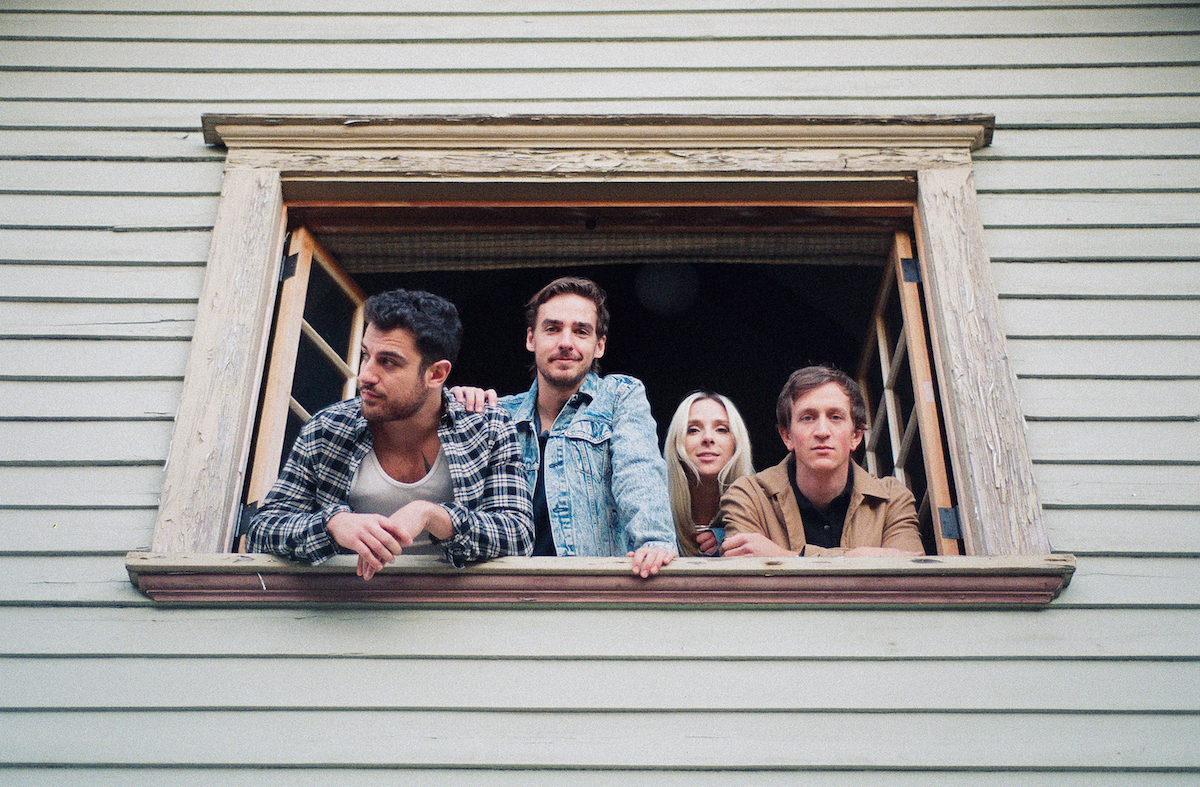 Note: This show has been moved from the 7th St Entry to the Fine Line, and all tickets purchased for the Entry show will be honored.

Bands share a whole lot more than just music. They encounter and endure life’s ups, downs, and everything in between as a collective. Along the way, band members grow individually and collectively. Following a year highlighted by 150-plus shows, Wild Rivers transpose personal experiences into relatable anthems woven from strands of folk, indie, rock, pop, country, and beyond. Their 2020 EP, Songs To Break Up To [Nettwerk], brings Wild Rivers—Khalid Yassein [guitar, vocals, keys], Devan Glover [vocals, bass], Andrew Oliver [lead guitar, bass], and Julien Laferrière [drums]—closer as it also draws listeners in.

“The EP was very personal for me specifically, but building it out with the band was a big step for all of us as friends,” says Khalid. “I spend 95% of my time with my bandmates. We’re a family, so we go through everything together. It’s autobiographical, but the group saw the vision and were empathetic. It went from a singular experience to everyone serving the vision tonally and musically.”

Since the release of their self-titled 2016 debut, Wild Rivers consistently progressed towards this point. As of 2019, their total streams surpassed 100 million and counting. 2018’s Eighty-Eight EP garnered acclaim courtesy of Rolling Stone Country, PopMatters, Earmilk, No Depression, and more. Additionally, the band packed shows across North America and beyond, touring alongside The Paper Kites, Donavan Woods, and Jake Bugg, to name a few. In the midst of a 2018 road marathon, Khalid faced the dissolution of a long-term relationship, so he poured his heartbreak into the music.

“When we began writing, the songs that spoke to us all were centered around the breakup,” he says. “We decided to lean into the theme and make the EP an exploration of the topic, what the different sides of a breakup are, and what the feelings are. These include the good and the bad, the acceptance and the sadness, and the new freedom. We wanted to write a collection of songs covering the spectrum of what you feel going through the end of a relationship.”

In order to do so, the group retreated to Nashville, TN in October 2019, working out of Creative Workshop with producer Skylar Wilson (Rayland Baxter; Justin Townes Earle; Joshua Hedley). In the studio, they expanded their sonic palette by further incorporating synths, guitar effects, gang vocals, and choral harmonies.

“In the past, we’ve mainly recorded in Toronto,” says Devan. “We could just hop into the studio whenever. In Nashville, we only had a limited amount of time, so we got locked in and focused on the end goal as a team. We were all staying together, so we were living and breathing the EP the whole time—which was awesome.”

“Our philosophy was to take risks and do something different,” Khalid elaborates. “The whole ethos really helped in making decisions and guiding what we did. If we felt unsure, different, or vulnerable, we always chased that feeling.”

“When you’re talking about breaking up or after it’s over, one person will think practically like, ‘We shouldn’t be together on paper. These are all of the reasons this relationship doesn’t make sense’,” Khalid goes on. “It’s the rational side of deciding whether or not you want the relationship. Then, there’s my side, which is romantic and naïve. I think, ‘Nothing matters, if we have love and our relationship is good.’ That’s the only future I’m thinking about. One partner thinks about the logistical hurdles; the other thinks about love. It’s the hopeless romantic versus the cold rational adult.”

On the follow-up “Kinda Feels Alright,” soft strumming and delicate percussion offset candid admissions from Khalid such as, “Last year baby, I was checking in. Now, I’m crashing.”

“One night, I went out on the town with my friend, got drunk, had a bunch of laughs, totally relaxed, and just experienced this amazing feeling,” he recalls. “I wasn’t sad about anything. I stopped thinking about the split. When I was walking home, something made me think of my ex, and all of these feelings came back. It turned on a dime. I realized I couldn’t focus on it anymore. I needed to get closure and get back to my life.”

Elsewhere on the EP, drum machines anchor the poignantly playful “Small Talk” as a piano that once belonged to Ray Charles rings out on the bold ballad “Do or Die.” Now, as the band bring Songs To Break Up To on the road, they’ll contribute $1 from every ticket sold to Voices of Our City Choir—a San Diego-based charity working to amend the housing crisis. By opening up on Songs To Break Up To, Wild Rivers ultimately connect like never before. “We want to validate people’s feelings,” Khalid leaves off. “It’s okay to be sad; it’s okay to be happy. There’s no right way to handle something like heartache, but you can talk about it with your friends. We try to show that.”

2017 proved to be a breakthrough year for Allman Brown: the momentum set in motion by 2013’s Sons And Daughters EP culminated in a debut album release (the acclaimed 1000 Years), which featured a number of old fan favourites alongside a batch of new songs. Influenced by Bob Dylan, Tracy Chapman and Bruce Springsteen whilst growing up in Hong Kong, Brown latterly discovered and embraced musical visionaries such as Ryan Adams, Justin Vernon and Sufjan Stevens.

All these musicians - alongside a wide range of literary writers and filmmakers - have indirectly shaped 1000 Years, a record that brims with emotions, varying styles and heart-on-sleeve lyrical honesty. Of the LP, R2 Magazine stated “This level of accomplishment would be rare in a more seasoned artist, but in a debutant it is quite breathtaking”, with Acoustic Magazine calling it “an album brimming with aching melodies”.

2018 saw Brown follow up with new music in the form of the Bury My Heart EP (including the singles "Bury My Heart" and "Moonlight") and embark on headline tours of Ireland, North America, the UK and Continental Europe after a series of well-received showcases at the SXSW Festival in Austin, Texas. In October, Brown surpassed the milestone of 80 million cumulative streams on Spotify and Apple Music, and issued a Justin Timberlake cover (‘Say Something’) for Mahogany. December saw Brown perform in the US with established folk outfit Good Old War, which included a date at the legendary Bowery Ballroom in New York City.

Album two, Darling, It’ll Be Alright, was produced by Ian Bater in the Oxfordshire countryside (like a number of songs on the debut LP), and contains ten brand new recordings. It is scheduled for release in May 2019 and will be preceded by new single "Shapes In The Sun", out February 22.