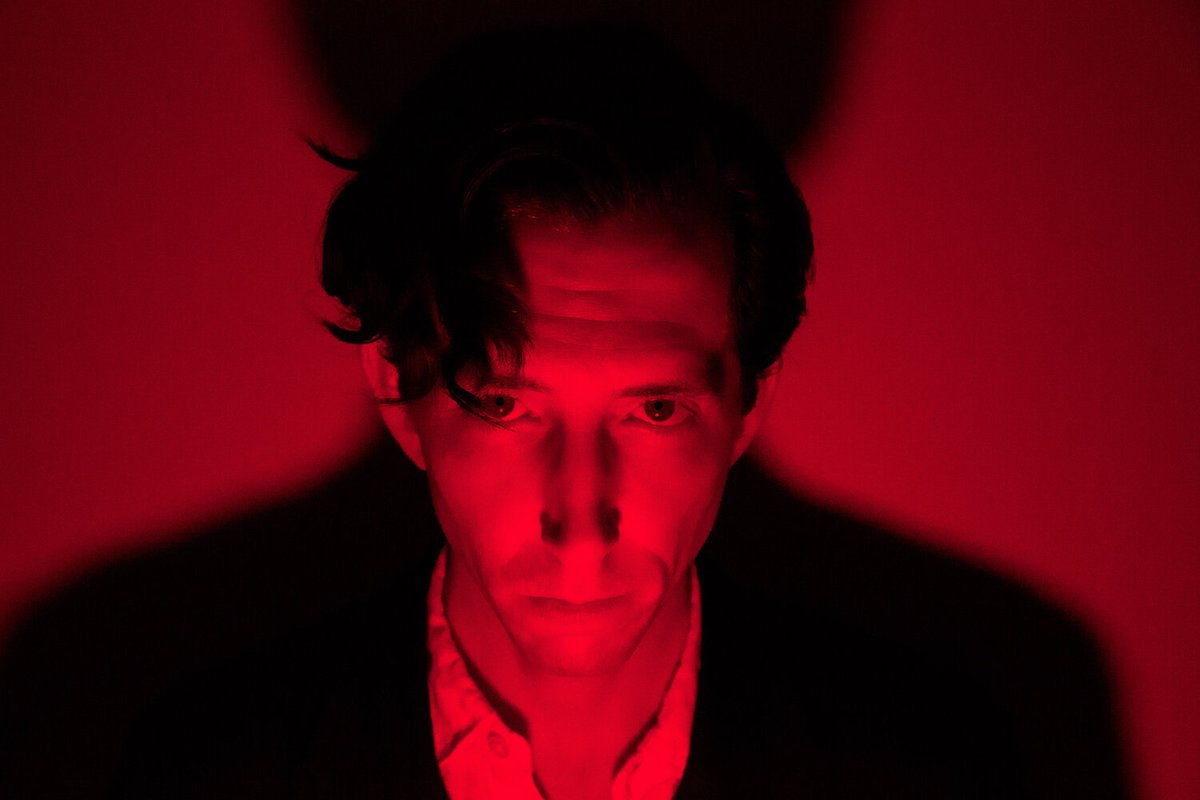 Note: The Pokey LaFarge show originally scheduled for June 3, 2020 has been rescheduled and will take place on February 18, 2021. All tickets purchased for the June 2020 performance will remain valid for the new date, so please hang on to your original ticket for entrance.

“The man singing these songs isn’t exactly the same man who wrote them,” says Pokey LaFarge of Rock Bottom Rhapsody, his eighth and latest studio release. “This album is about the story of who I used to be.” In early 2018, LaFarge — searching for the sort of artistic freedom and inspiration he wasn’t finding in the Midwest — relocated from his longtime home base of St. Louis, Missouri, to Los Angeles, California. New songs came quickly to LaFarge in his new environment, but new temptations soon found him, as well.

Though he declines to get into specifics, LaFarge admits that he experienced a significant “fall from grace” during the last months of 2018. “Things sort of started to unravel in my mind,” he recalls. “I was letting evil spirits and demons rule me, and I came into certain agreements with them, and it took me down. I was giving too much power to the darkness, and I got in too deep, and I made some bad decisions. The reality of the situation is that I hit the closest to rock bottom that I ever had, and I’ve definitely had some hardships in my life.”

While songs like “Fuck Me Up,” “End of My Rope,” “Fallen Angel” and “Ain’t Comin Home” were all written before LaFarge’s life went into a downward spiral, their lyrics definitely speak of a soul in crisis — even though their author himself wasn’t fully aware of it at the time. “It’s a case of me writing the story and writing the song, and then unfortunately living it,” he reflects. “The last three, four years have just been the hardest that I can remember. I’d played the Ryman, I was selling theaters and clubs out all over the world, I got to travel the world, I was making a living, I got to buy a house; I could have whatever food and booze I wanted at any time, women… but I was unhappiest I’d ever been, because I don’t think I really believed that I deserved my success, even though I worked so hard to get everything I had. And I was going towards the darkness. I was longing for death more than I was longing for life — not necessarily literally longing for actual death, but destruction definitely ensued; self-sabotage and self-destruction definitely happened.”

But shortly before the recording of Rock Bottom Rhapsody began, LaFarge experienced a spiritual awakening — and the faith he re-embraced in his hour of darkness helped to buoy him through the making of the album. “I wrote this record before the fall from grace, and then it was recorded after the fall from grace. So you see how that could be kind of odd,” he says. “What I was searching for was peace and humility in the aftermath of the carnage, of things I had wrecked, and — seemingly at the time — completely destroyed. I was just, like, trying to survive; I had to fight every time to get up to that microphone and just sing. It was kind of like a last stand, like the Alamo, or something. I was like, ‘Man, I’ve gotta get this out, and then I’m gone. This could be it.’ I didn’t know if I was gonna kill myself, or if I was going to pack up my things and walk away and disappear… or if this was going to lead to some sort of personal redemption through my reborn faith, and the pursuit of enlightenment and wisdom and peace and all those things that God can bring into one’s life, if we just stay the heck out of the way.”

Though he was struggling for spiritual equilibrium at the time, LaFarge at least had some rock-solid musical support to lean on. Recorded primarily at Reliable Recorders on Chicago’s Northwest side, Rock Bottom Rhapsody was produced by LaFarge’s friend and collaborator Chris Seefried (who also co-wrote several of the album’s tracks), and features the considerable talents of guitarist Joel Paterson, keyboardist Scott Ligon, upright/electric bassist Jimmy Sutton, and drummer Alex Hall (who also engineered the record), with additional vocal harmonies added by Ligon and Casey McDonough.

“It’s pretty much the same guys as I had done [2015’s] Something in the Water with, and the same studio where I’d recorded it, so there was definitely some familiarity and camaraderie there,” says LaFarge. “I would put those guys up against any Nashville band, any L.A. or Austin band. They’re just class. And if you want to record with them, you kinda got to go to them — even if it means leaving the perennial sun of Los Angeles for the colder-than-Mars tundra of Chicago, with the polar vortex blowing through.”

Though full of soulful life, tracks like “Bluebird,” “Storm A Comin” and “Lost in the Crowd” all feature leaner instrumental arrangements than the ones that characterized 2017’s Manic Revelations. “Chris and I wanted to strip it back from the last record,” LaFarge explains. “We didn’t want any horns, we didn’t want anything to get in the way of the vocals and the lyrics. I think before, I was a little more concerned with style and concept, and that in turn made things just a little too complicated, like I was trying more to serve the music and the musicians than I was trying to serve the song…

“I had already mapped out the sort of instrumentation I wanted to have on the road with me,” he continues, “and that’s pretty much what you hear on the record. It’s going to be me on guitars, then piano and organ, electric guitar, upright and electric bass, and drums — a five-piece, including me.” After taking a break from the album to take a “dark, sad, villainous role” in the forthcoming Netflix feature film The Devil All the Time — “The irony wasn’t lost on me that, one month after finding God, the first feature film opportunity that comes across my table has that for a title,” he chuckles — LaFarge returned to L.A. and recorded the gorgeous “Lucky Sometimes” at Valentine Studios in North Hollywood. The recording features a string quartet led by violinist Paul Cartwright, and Miles Davis keyboardist Deron Johnson on piano. “We did it live in the studio, Frank Sinatra-style,” LaFarge exults. “It was pretty cool!”

Through it all, LaFarge’s plaintive vocals remain pleasingly front and center. “I’ve always loved crooners,” he says. “Some people might think of crooners in the sense of the Bing Crosby-Frank Sinatra-Dean Martin type of era, which of course I love, but also I would consider people like Roy Orbison, Nick Cave, Bob Dylan and Tom Jones crooners, as well. I’ve always loved that narrative style of singing, always loved ballads just taking your voice to the limit and telling a story.”

Musically, LaFarge continues to mix and match a wide variety of styles and traditions, while never losing track of his own vision. “I listen to a lot of Latino music, and I listen to a lot of French music, whether it comes from France or Africa, and I listen to a lot of rocksteady — you know, fifties and sixties Jamaican music. I’ll mess with rhythms and try to come up with stuff that sounds almost more traditional in certain genres, and then keep playing it and try and get it into something that I’ll want to sing every night. This record is kind of like Roy Orbison and Bob Dylan hanging out with chanson singers and French jazz bands in like the forties, but I was never trying to make it sound like a particular person. It was more like, ‘If it sounds too much like this person, I need to make it sound more like me.’”

Despite the trying period that preceded its recording, Rock Bottom Rhapsody is ultimately far more uplifting and life-affirming than its title would suggest. “That desperation, that struggle,” LaFarge ponders, “Did it add something to the record? It certainly did. I mean, I don’t know if it made it better; it just is what it is. It’s not up to me to decide if people are going to feel that…

“Certainly, there are things in The Bible that I’ve interpreted to mean that suffering is a part of life,” he continues. “And along with that, there’s different seasons; and there’s pleasures and joys and triumphs, as well. And when we’re on top, we think we’ll never fall. But that fall has certainly given some deeper meaning to things that I’ll write going forward, and that’s something to be grateful for.”

“I’m always changing,” Esther Rose sings at the top of her sophomore album, You Made It This Far. The line is at once a promise and a plea, a concise distillation of her commitment to evolution as well as her dogged determination to meet every challenge in her path with unconditional acceptance. Laid-back yet deliberate, her delivery here marries old-school country and rural folk with a plainspoken philosophy that’s thoroughly modern, and the end result is a record that’s as joyful as it is restless, one that weaves fiddle and lap steel around profound revelations, late night conversations, and all the moments in between.

“There’s this theme of radical acceptance running through the whole album,” explains Rose, who recorded the album live to tape in just four days. “I didn’t realize it until after I’d finished writing the songs, but they all came from this place of trying to understand and truly accept myself and others in our most vulnerable moments of confusion or despair.”

A New Orleanian for the last decade, Rose first gained national prominence with the release of 2017’s This Time Last Night, an intoxicating debut that prompted Fader to praise her “honest, gorgeous country songs” and rave that “her voice has a pitched-up June Carter quality, her melodies are simple like Jimmie Rodgers’s, and her tone is reminiscent of bluesy, lovelorn greats like Rex Griffin and Patsy Cline.” The record earned Rose festival performances from Savannah Stopover to AmericanaFest alongside dates with The Punch Brothers, Pokey Lafarge, and The Deslondes, and it even caught the ear of fellow Detroit native Jack White, who was so taken with the music that he invited Rose to duet with him on his Boarding House Reach album and to share the stage for a live performance at Jazz Fest.