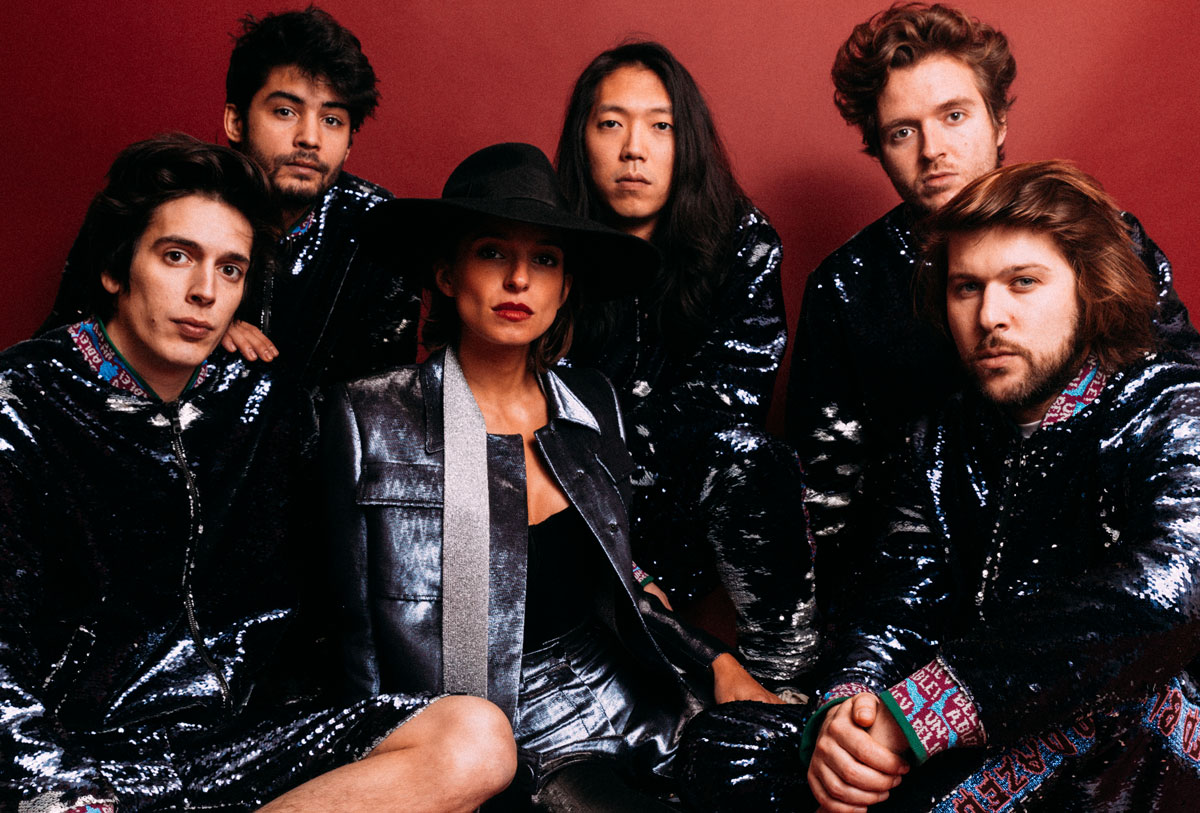 There is no rescheduled date, but we are now offering credit for canceled shows. Please carefully fill out the form at the link below to receive a credit equaling your ticket purchase for this event. You can then apply that credit to a future ticket purchase for most events at the same venue as your original ticket purchase. You can also call etix to request a credit at 1-800-514-3849.

After a two week period, all tickets purchased online (that have not opted for a credit) will be automatically refunded.

Previously: The L’Impératrice show originally scheduled for April 3, 2020 has been rescheduled and will take place on March 5, 2021. All tickets purchased for the April 2020 performance will remain valid for the new date, so please hang on to your original ticket for entrance.

L’Impératrice’s debut album arrived in 2018 all the pomp and circumstance of a coronation. “Impératrice” is French for “Empress”, and if their moniker is the most difficult thing to grasp for anglophones, then musically there’s nothing that doesn’t translate. The Parisians draw from a range of genres, from ’70s space disco to downtempo ’90s synth pop, taking in French film composers like François de Roubaix and Michel Legrand along the way. “Albums that sold 500 copies in the 1970s are the records that interest us most,” they say. Matahari is a glittering, cinematic summation of six years hard work that draws on some of the finest found sounds and forgotten sonic fandangos hiding in crates across the land, all given L’Impératrice’s own inimitable 21st century twist.

What began as the project of one disaffected culture journalist is now, some six years later, a six-headed beast. Charles de Boisseguin had carved out a niche for himself as a respected journalist. Bylines all over France’s most respected music weekly Les Inrockuptibles sufficed for a time, and he and some friends started Keith magazine in 2007 in homage to culture’s greatest Keiths, from Richards to Haring. As a critic, Boisseguin had a burning conviction that he could no longer disparage the works of others until he had a go himself. And so one beautiful spring morning in 2012 he made the jump and L’Impératrice was born. The poacher had turned gamekeeper.

Early productions were modest. Boisseguin traded in his poisoned pen for a Moog synthesizer and cut his teeth on GarageBand. This inchoate noise was still some way from becoming the chimerical analog disco monster that has enchanted so many ears in France, but a strong feminine sound began to emerge nonetheless, which eventually beget the name. A self-titled EP arrived on cool Parisian underground dance label Cracki in October of that year, and by then Boisseguin was getting the hang of being a musician. The eponymously-titled track that opens the EP features slick jazzy motifs conflated with some old-skool hip hop flow. It won instant plaudits and set the tone for future successes.

The band grew by stealth, with Hagni Gwon arriving on claviers, David Gaugué on the bass and Tom Daveau on the drums, soon turning a one-man project into a gang. Chanteuse Flore Benguigui’s arrival gave their sophisti-pop sound a tangible femininity that had always been there as an undercurrent. Achille Trocellier on guitars became the final piece of the puzzle. L’Impératrice’s signed to microqlima in 2016. EPs such as Odyssée and Séquences received critical adulation.

Then came a first glimpse of the long-awaited album in 2017 – with ‘Erreur 404’ – a lead single that juxtaposes silky, almost simplistic French synthpop with a barbed lyric (the deliciously impertinent “bon voyage imbécile” line is a highlight). L’Impératrice make writing radio-friendly earworms look easy, and the French have been voting with their feet in a positive way, both on the dancefloor and at gigs. A show at La Cigale, a 2,000 capacity venue with an illustrious history in the 18eme arrondissement of Paris, recently sold out within two weeks.

Matahari is laden with sumptuous grooves and replete with potential singles, subsuming all the elements, from Air to Frank Ocean. The title track mixes analogue space disco with ostentatious, irrepressible funk, a mightily impressive undertaking featuring swooping philly strings and emphatic brass. It’s an ambitious production with a percussive core that was clearly recorded live in the studio, and while there are many layers, it’s pieced together with a deft hand. The track returns as a penultimate instrumental send-off, and ‘Là-Haut’, a weightless and dreamy instrumental to open proceedings, features some inspired peripatetic bass from Gaugué and some diaphanous percussion that melts in the ears.

Elsewhere ‘Paris’ captures the contemporary mise en scène of the bustling la Ville Lumière, with a delectable vocal performance from Benguigui. Her adaptability as a vocalist is demonstrated with a sultry sprechgesang delivery on ‘Balade Fantôme’, a spooky spoken word about being lost in space. ‘Masques’ adopts an almost klezmer-like tristesse, with vertiginous violins and a classy musical chassis. Meanwhile ‘Dreaming of You’ is a steamy, almost claustrophobic collaboration with electropop kindred souls and labelmates Isaac Delusion.

Subtle yet majestic, L’Impératrice have a bright future in the republic, though if the six-headed beast is to become real French musical royalty then they’ll have to watch their têtes. In fairness, Boisseguin hasn’t put a foot wrong since he threw in the day job six years ago. If L’Impératrice’s stealthy rise to pre-eminence has all been part of the plan at home, then you wouldn’t rule out la domination du monde being on the cards in the future.